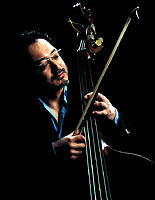 Born in Takamatsu of Kagawa prefecture in 1953. Having both parents as musicians, if was naturel for him to start playing bass at. the age of sixteen. He studied under professor Seiichi Imamura at the Tokyo University of Music and Fine Art, after which he left for the US to enter Berklee College of Music in 1974, also he studied at the Juiliard School under the former principal bass player to The New York Philharmonic, John A. Schaeffer. After graduation, his career started with the Horace Silver Quintet in 1975, he has shown his talents in various well-known bands. He is a man of exceptional talent who can unite his burring heart for jazz with the surpassing skills of classical music.